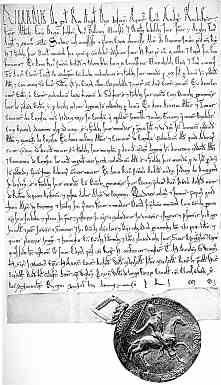 The document shown here is a photographic image of the Charter of Richard I, confirming to Alexander de Baretin (butler to Henry II) all his property fairly purchased or confirmed to him by Henry II. (London, Westminster Abbey Muniments no. 657).  It is a lengthy document, written in elegant calligraphy, with an image of the great seal of Richard I.  What the image displays is the idea that the muniment itself was not just a legally binding document, but a reputable and distinguished treasure with social significance in its own right.  Muniments in the ancient world were matters of record dealing with deeds, statutory grants, or judgments which passed title to real property.  The possession of the muniment allowed the person to defend their rights and privileges as legal heir or claimant.

The Book of Revelation, written sometime in the late 90’s A.D., by John the Apostle of Jesus, could be seen as the Muniment document of Creation.  In this way the book is about the consummation of God’s great love for humanity, and the extravagant lengths to which He will go to save all who will believe in Jesus Christ.  The authorship, origination, blessing, and purpose are all found in the beginning 3 verses of this muniment:

Revelation 1:1-3
The revelation from Jesus Christ, which God gave him to show his servants what must soon take place. He made it known by sending his angel to his servant John, who testified to the word of God and to the testimony of Jesus Christ, even to all that he saw.  Blessed is he who reads and those who hear the words of the prophecy, and heed the things which are written in it; for the time is near.

John claims this information was revealed to him by an angel sent from God.  The document includes the “word” of God and the “testimony” of Jesus Christ.  Anyone who “reads, hears, and heeds” the things written in this work are blessed.  And finally, “the time is near.”

We all know that “time is near” must be a relative term, since almost 2,000 years have passed since it was written on papyrus.  Time as humans understand the concept however, does not negate what must be near in God’s chronology.  Within the chapters of the Book of Revelation as a whole we find a scroll introduced containing seven seals across the document.  As the opening of this scroll is announced, and each consecutive seal is broken, what is revealed is the grace of God for those who believe, and the judgment of God for those who stubbornly refuse to acknowledge His Lordship or trust in Jesus for salvation.

Viewed as a complete document, the scroll is not unlike a “chinese box,” which when opened, only reveals yet another box.  Some scholars teach that one seal was on the outside, then after each seal is read, there was another seal deeper in the document to break before reading on.  The first six seals bring stand alone judgments, while the seventh seal reveals seven more judgments associated with seven trumpets.  The first sixth trumpets announce the next six judgments. The seventh trumpet announces the end of all judgments being poured out like “bowls,” and there are seven bowls to be poured.  See, chinese boxes, sort of, the bowls, trumpets and seals are all part of the scroll as a whole.

If this indeed is an accurate portrayal of the Book of Revelation, and it does actually reveal future events to be unveiled in God’s timing, the testimony of the book is the highest document on earth.  At the end of it all, after the salvation for millions, and the coming judgment for millions more, the words that stands out to me in these muniments are the promises of Jesus Himself.

Revelation 22:10
Do not seal up the words of the prophecy of this book, for the time is near.

Revelation 22:12-13
Behold, I am coming quickly, and My reward is with Me, to render to every man according to what he has done.  I am the Alpha and the Omega, the first and the last, the beginning and the end.

We live even now under the muniments of God’s will.  Reading, hearing, and heeding the whole Bible, but especially Revelation, should lead us to live each day for our intended purpose:

To experience God’s grace daily, and extend His glory to the ends of the Earth.