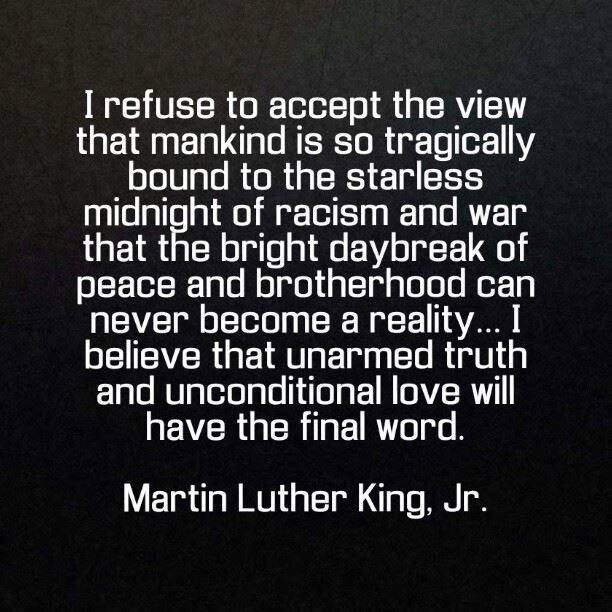 It’s hard to believe this man’s wisdom is so ignored today. Studying this man’s influence during my last course in college, I was inspired by his total devotion to truth, and his message of love.  Dr. King motivated me to pursue ministry with a renewed commitment to both of the ideas: unarmed truth, and unconditional love.

In today’s politicized, very divided USA, I wonder where the next voice of reason will appear.  There are those who think Dr. King is responsible for our current destructive racial climate, assigning blame for the ethnic challenges today squarely on his shoulders.  Anyone who has ever studied his work, listened to him speak, or thought for one second about his message, knows this is not true.  We are so far removed from King’s agenda that I’m sure it would sicken him, as it does me, to think of where we’re headed.

I say this because I truly believe unless something changes, the raging maniacal views of the east and west coast’s liberal minds will fan the flames of anarchy, plunging the whole nation into chaos.  Someone with enough influence to grab their attention needs to step forward; anyone who can just get them to pause and take a breath already, but who will that be?  If a beloved actress, can be so deluded, so consumed with the idea that only she and her out of touch friends are the only sane people left in our county, who will calm her down? They don’t listen to people like me.  They don’t listen to the facts, or the truth, and they have only a Hollywood distorted view of love.  No wonder it’s hard to get their attention.

Why the diatribe?  Why today?

A commitment to “unarmed truth” defines a determination to check facts, know what’s true, speak that truth, but not bludgeon someone comatose with it. The truth is President-elect Trump, is our next President.  I don’t have to gloat about it, I don’t have to demean those around me that voted Democrat.  I don’t have to arm myself for battle every time his name comes up.  I believe and defend the 1st Amendment right of every person to speak their mind.  I just wish the other side would do the same.  This is where the next idea comes into play.

“Unconditional love” is something completely foreign to the liberal’s mindset which determines for themselves its definition. Dr. King would challenge them on this point because this idea is foreign to mankind in general.  Dr. King would point out that while mankind is “capable” of this kind of transformative love, it is a choice too few are willing to make.  He would suggest that the only way possible for a man or woman filled with hate, anger, or murderous intentions,  is to yield their life to the Lordship of Jesus Christ.  In finding themselves cleansed from these emotions/intentions, by the power of Jesus’ love, then and only then will they be able to love others “unconditionally.”

This highlights the essence of the issue.  Most of Hollywood, the Democratic party leaders, and those who follow their policies, are diametrically opposed to the truth that Jesus should determine my politics, much less my life choices.  This total denial of an “unconditional love” paradigm is the force behind such vehement outcries in public forums.  Clearly our nation is divided.  Where is the voice of reason?  Who will stand and bring us back together?  Can it even be accomplished?  Or are we destined to repeat the ugliest and deadliest period of our nation’s history, as friend turns against friend, brother against brother, parents against children, and kill each other … just to be right?

Dr. King’s words are true.  However, it may take the promised return of Jesus Christ to see them fulfilled.