According to the Urban Dictionary, “Ignorance is Bliss” is a term used to falsely justify apathy on the given subject in the form of a catchy cliche.  Example: Seat belts are to be worn while driving a motor vehicle in Texas. If an officer of the law stops you to ask why you aren’t wearing your seat belt, don’t answer “I didn’t know I had to.”  Ignorance of the law, is not immunization from the law.  And by the way, every passenger in the vehicle must also be buckled up… don’t be caught unaware.

Today, after examining FaceBook, it seems to me that we should expand the meaning to include any attitude used by the liberal media, iconic celebrities, Facebook post writer, or Twitter-bird who screams incorrect information, to falsely justify their hate.  They are blissfully ignorant of just how wrong they are; they are unaware and don’t seem to care.

It’s an easy trap to fall into because most of us live in such small circles of influence, and this earth is a great big world.  I would venture to say that less than 1% of FaceBook writers even know what Trump’s travel ban document really stated, because they haven’t read it.  To have an opinion on a matter so grave as this would necessarily dictate, that a person do some research on the topic, don’t you think?  Yet, the constant spin-doctored dribble from the “unaware” social media, is like a festering sore oozing green-grey slime, seeking out someone to infect with this particular version of social cancer.  For example, a simple search on my browser this morning yielded the EXACT language used, showing the WHOLE executive order as submitted by the White House.

Perhaps we should return to a Three-Wise-Monkey attitude.  See wisely, hear wisely, and speak wisely.  The Three-Wise-Monkeys came to us from Japan, where they have been widely known since the 17th century.  While there are many possible meanings, the exact meaning lost in the passing years, there is something we should gain here.   The monkey’s gestures suggest that we “see no evil, hear no evil, and speak no evil.”  A wise “monkey” person is one who is prudent in what they look at, listen to, or what they say.  The wise person considers the consequences (awareness of each having consequences), then makes sensible decisions with the awareness that if he or she does not know what to do, they ask another “monkey” person for advice. 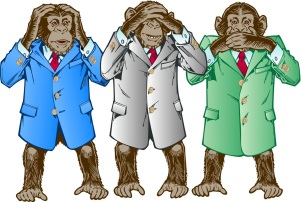 Awareness, or consciousness, is what distinguishes us as a human.  That a monkey should have to teach us how to act is rather insulting at the least.  Humanity has traveled down a long dark path away from what we were created to know deep inside our DNA.  Right and wrong go all the way back to the beginning, with Adam and Eve choosing to use the “but we didn’t know” excuse with God.  The problem is, both Adam and Eve, and God, knew this wasn’t true.  They saw evil, they heard evil, and they spoke (said yes) to evil.  They were not wise in these actions.  They pretended to be unaware of the consequences of their actions, but in this they lied even to themselves.

Ok.  Time to wrap it all up.  First, every person’s actions have consequences.  Being blissfully ignorant of this fact, will not impede the person’s accountability in the matter. Second, when we continue to only see the “evil” in other people, instead of the “good,” we unwisely tend to lash out in ways that are in themselves evil.  Third, this in no way brings glory to the God who created us to know better.  It’s time we employ the “one another” rule given to us in God’s Word.

Ephesians 4:32
Be kind to one another, tender-hearted, forgiving each other, just as God in Christ also has forgiven you.

1 Thessalonians 5:11
Therefore encourage one another and build up one another, just as you also are doing.

Ephesians 4:2
with all humility and gentleness, with patience, showing tolerance for one another in love,