Before you read this article, I need to warn you.  The challenge I have taken on is to discuss complicated theological thoughts in a way that the person sitting in a Bible study can understand it while never having been trained at Seminaries like most pastors.  In tackling this challenge, I still have to provide a basis for the information.  Theology is the study of God.  When we study God, we find the concept of the “Trinity,” Father, Son, and Spirit, all throughout Scripture.  Seeing God in three persons acting in the Bible is not the difficult part.  Seeing them as all being God, and all being ONE God… well, that’s a horse of another color.

Today I’m asking you just stay with me.  If something confuses you, or if you have a question, please feel free to email me and I’ll do my best to provide an answer.

I heard once the Irish shamrock was the best illustration of the trinity:  One plant, Three leaves.  In the most simplistic way possible this really isn’t a bad image, but there’s a problem with every Trinitarian model, and it is seen in the shamrock too.  You can tear the shamrock into three pieces, but not the Trinity.  You may have seen the egg image [yolk/egg white/shell = Father/Son/Spirit], or the apple explanation [core/flesh/skin] as images for the Trinity.  Each of these illustrations are good to a point, but could never comprehensively help us understand the complicated relationship of the Trinity.

This is the problem not just with visual images, but more sophisticated models of the Trinity as well.  There are two primary theological models used today to explain the Trinity to the human mind, the “psychological model” and the “social model.”

Psychological model of the Trinity

This model was developed by Saint Augustine of Hippo (354-430 A.D.).  He believed the Trinity was like a great mind.  Our human minds consist of: intellect, memory, and will.  Yet, we only have one mind.  So, when we know ourselves… we are the “knower, the known, and the knowledge” all at the same time.  Augustine argued that God has a mind too, and when God knows Himself, God’s thoughts of Himself are so perfect that the thought itself is God.  His argument then is that the three persons of the Trinity are: God-the knower, known, and knowledge.  Sounds good but there’s a problem.  What about relationships?  We contend God is three PERSONS, so the model here speaks to God’s one-ness but not to His three-ness… His substance as three persons.

Social model of the Trinity

You can Google “Cappadocian fathers” and discover Basil the Great (330-379 A.D.) Gregory of Nyssa (335-395 A.D., and Basil’s younger brother), and Gregory of Nazianzus (329-389 A.D.) who represent some of the patriarchs of Christian thought.  In the fourth century these men developed what is now called the “social model” explaining the Trinity.  Simply put, the Father, Son, and Holy Spirit are three persons, and they relate to one another in love.  It is an interpersonal model.  It is also often used as a model for human society, where my dad, me, and my son in relationship represent an image of God’s three-ness.  But it doesn’t help us understand God’s one-ness.  The Cappadocians began with three separate images of God, but found it difficult to explain how God is one.

Over the centuries different theologians from Protestant and Roman Catholic schools would argue the merits of both these models to explain the Trinity, and never come to any consensus on either.  I’ve tried over the years to find a good image to use as a simple way to understand the Trinity.   In closing today, I offer this as the most simple, but most factual view of the Trinity. 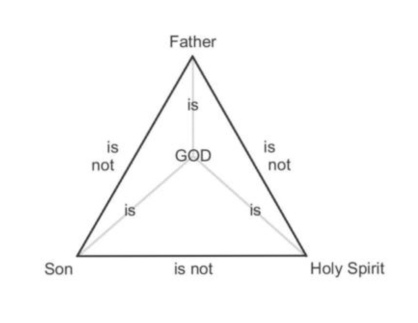 Next time we will look more at this triangle, and dive deeper into this mystery.