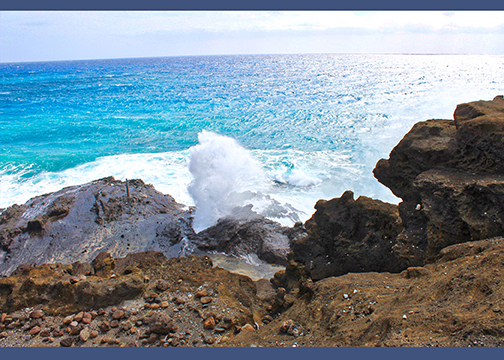 What you see here is a spout of water coming up out of a sea cave.  The shaft was formed as the lava cooled, creating a spout for the incoming waves to shoot up and out, commonly referred to as a “blowhole.”  It is not unlike the hole atop a whale’s head through which the animal breathes air like a nostril.  Again, the whale’s nostril is also called a “blowhole.”

There is also a slang use of the term “blowhole,” reserved for that annoying person who is constantly spouting from their mouths without filtering what they say.  I may have been called this name in the past, when my own filtering system didn’t work so well.  Learning to hear what you want to say in your own head, before it actually comes out of your mouth to someone else’s ears, is in fact a difficult thing to do.  Really, almost impossible, for those who have never tried.

I get tired today of the constant barrage of social elites, celebrities, or news media personalities who determinedly decide they know better than the rest of us peasants regarding our current political status.  Does acting in the entertainment business somehow equip, empower or enable a person to “know” more than I do about right and wrong, or good leadership and poor leadership?  Does their social elite status give them the privilege of talking down to me, as though I’m an uneducated ignoramus?  How do we get the message to the average American citizen to just stop listening to this nonsense?  What voice will finally rise above the din of arrogant verbiage constantly being spouted from the Hollywood “blowholes?” I suggest you have the power to switch the channel, and you would be better for it.

That said, do I come off as a “blowhole” here?  I sincerely hope not.  But somebody’s got to say it.  Shut up already.