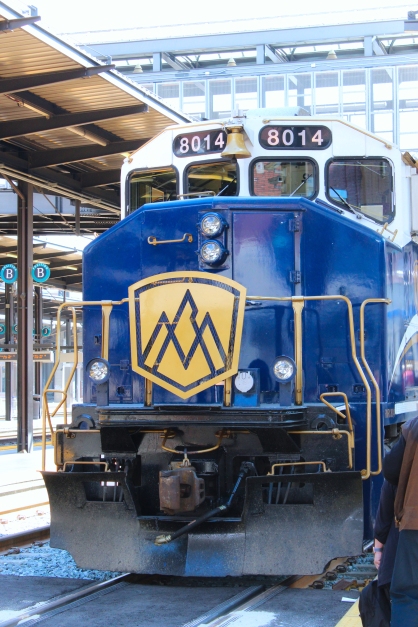 This is the Rocky Mountaineer engine which pulled our train from Seattle to Vancouver on the first leg of our fantastic vacation in May, 2018.  As we boarded that afternoon I was almost overcome with excitement at what I would see and experience over the next week and a half.  I remember the rush of adrenalin at the first movement of the train pulling out of the station, and the unmitigated sense of joy at being in that place, at that time.

I’m thinking this must be what it was like (in some greater way) for my dear friend Jay Wheelock, yesterday morning at 6:20 a.m. CDT., when Jay went to be with Jesus.  His passing was difficult for me.  I loved this man as much as I ever could have loved a brother.

He was in fact my brother, because I also had the rare privilege of leading Jay to trust in Jesus as his own personal Savior back in the late 1990’s.  For the last 20 years or so Jay and I played lots of golf together.  We went on many spiritual journeys together, as his mind led Jay to read the Bible constantly and come to me with a list of questions to help him make sense of it all.  Now, looking back on all those years, and all that conversation and discussion, I miss him already.  I’m sad… but it’s a joyful sadness.  Because I know… that Jay now knows… the truth of all we discussed.

Consider for a moment these truths:

Psalm 139:16  ~  You saw me before I was born. Every day of my life was recorded in your book. Every moment was laid out before a single day had passed.

Psalm 39:4  ~  LORD, remind me how brief my time on earth will be. Remind me that my days are numbered–how fleeting my life is.

Romans 8:1  ~  So now there is no condemnation for those who belong to Christ Jesus.

1 Corinthians 15:53-58  ~  Then, when our dying bodies have been transformed into bodies that will never die, this Scripture will be fulfilled:  “Death is swallowed up in victory. O death, where is your victory? O death, where is your sting?”
For sin is the sting that results in death, and the law gives sin its power. But thank God! He gives us victory over sin and death through our Lord Jesus Christ. So, my dear brothers and sisters, be strong and immovable. Always work enthusiastically for the Lord, for you know that nothing you do for the Lord is ever useless.

The schedule for the Rocky Mountaineer train journey was never precise, they always gave us a general arrival time span.  This was because they shared the tracks with other trains and the train traffic controllers determined who went where and when.

However, in the Sovereign plan of God, laid out before Jay was ever born, God had it all worked out.  And God is never late or imprecise.

The ultimate truth is crystal clear:

Romans 5:6  ~  You see, at just the right time, when we were still powerless, Christ died for the ungodly.

Thank you God, for my brother Jay, who now knows the truth of these words, and lives now in the power of your presence.

Jeffrey Deaver has written 13 novels about Lincoln Rhyme, a former NYPD Homicide Detective turned Forensic Consultant, who left the NYPD when he became a quadriplegic after an accident on the job.  Partnering with Amelia Sachs, a former model turned investigator now working with NYPD, she tall, fast driving, nail biting detective “walks the grid” in search of trace evidence to solve complex crimes.  The science behind Crime Scene Investigation (CSI) is not fiction however. This process involves meticulous observation and documentation of the scene – photography, identification of physical evidence and collecting it, including fingerprints, footwear impressions, hair, fibers, biological fluids, and DNA for analysis.  All this information combined with careful reasoning of the facts surrounding the crime, often aid in solving the “who done it,” which makes fiction authors so famous.  “Stranger than fiction?”  Often not, in real life.

There is one mystery today that remains solved but unresolved, for those who study the facts of it.  Since we only have trace evidence in the matter, and that only a smattering of documentation compared to what is being collected at crimes scenes today, we must trust in the veracity of said documentation.  The narrative is as old as time itself, in terms of motive.  The scene of the crime was one of power, and an expression of what happens when you cross the sovereignty of the State.  The characters in the story are countless, including perhaps on some level all of mankind itself.  The weapons, still not in evidence today: three nails and a spear.

The Jewish leadership determined that rather than let the people perish at the hand of a hostile Roman overlord, which they deemed would occur if something wasn’t done, agreed to hand over Jesus Christ of Nazareth as their sacrificial lamb, in an effort to restore sanity back to heir jurisdiction.  The puppet king Herod, laughed his way through the proceedings, expecting Jesus to perform miracles to entertain him.  The powerless procurator, Pilate, tried cunningly to outwit the Jewish high priests, but in the end came up with a plan to free Jesus, whom he thought was an innocent, which backfired, releasing the murderous Barabbas instead.

In the end, not only Judas, but all of Jesus’ closest followers ran from his arrest and hid themselves.  Historically the brutality of crucifixion is well documented through secular documents as well as the Bible.  The horrific nature of this kind of death, and the reasons why the Roman government employed it, are not lost at all.  Yet the mystery remains unresolved in many people today.

Some read the story as a fictional narrative, believing in their hearts that most of it is made up, just like Noah’s Ark, the crossing of the Red Sea, or the walls of Jericho crumbling to the ground.  All we have left of any of these stories is the trace evidence.  A document which has lasted so long as a validated, historically accurate, evidentiary exhibit, that the truths it holds cannot be challenged.  When God documented what he determined would happen, it happened.  Including offering up His own Son, His only Son, as a sacrifice for the Sin of the world.

Yet the mystery remains.  Why?

Why would God, “so love the world?”
Why would God see this death as the only way to redeem us?
Why would Jesus allow Himself to be used in this way?
Why?

We could search for the rest of our natural lives to answer this question, but human minds cannot reason with the unmistakable truth of it all:

Romans 5:6
For while we were still helpless, at the right time Christ died for the ungodly.