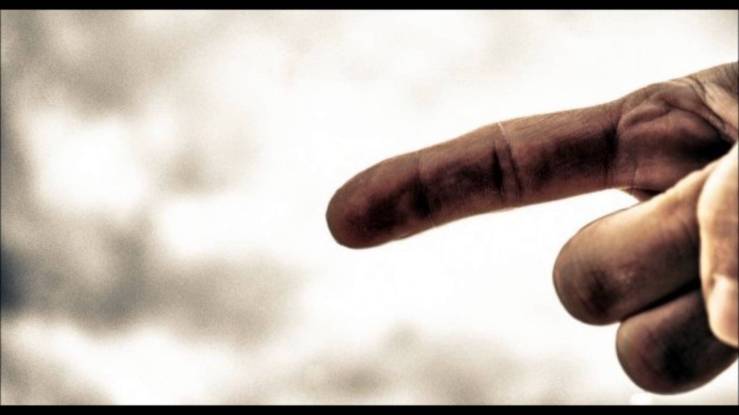 A man’s hand appeared, hovering near the wall next to a lampstand, before the crowd, in the king’s palace. The king watched the back of the hand as it moved, like a quill the finger wrote on the wall while the king grew pale and frightened.  His hips would no longer support his weight, and his wobbly knees knocked together.  As the tale is told, the king offered wealth beyond imagination to anyone who could interpret what had been written on the wall.  The thousand nobles and their guests could not, his servants could not, and the fear of not knowing the meaning of the words cast an even greater anxiety into the king’s heart.

“There is a man,” she said.  This wise man from the west was brought before the king.  As the king went through his voir dire, accessing the man’s curriculum vita, he was assured the man could help.  Once convinced, the king offered the man a king’s ransom for interpreting the message on the wall. What the man said in response may shock you…

“Keep your gifts for yourself or give your rewards to someone else; however, I will read the inscription to the king and make the interpretation know to him.”

A hush came over the crowd as the man stood before the king, ignoring the ransom, and stating boldly his ability to deliver the message with clarity.  The man read the words:

The wise man from the west, then interpreted the writing:

Mene – God has numbered your kingdom and put an end to it… (repeated twice for emphasis)
Tekel – you have been weighed on the scales and found deficient…
Upharsin – your kingdom has been divided and given over to the Medes and Persians (PERES).

As Paul Harvey would say, “Now for the REST of the story,” that very same night, (the story concludes), Belshazzar the Chaldean king was slain, and Dairus the king of the Medes took over the kingdom. (read the whole story in Daniel 5)

I always loved watching “Lassie” on television when I was a kid.  My favorite memory of those wholesome lessons was the “you see Timmy” part.  The dad or the mom would always have to explain the moral of the story to Timmy .  The words they spoke were like a quill writing gently into our minds the intentions of the story’s author.

What is the point of the story of the king?  Why is it included in the greatest book ever written?  What can we learn from it’s meaning?  The writer of Hebrews helps us here.

Hebrews 4:13
And there is no creature hidden from His sight, but all things are open and laid bare to the eyes of Him with whom we have to do.

The God of heaven, the Author of Creation, the King of kings and Lord of lords, knows where you are, knows your thoughts and fears, knows the intentions of your heart.  Be honest enough to admit, with this truth comes great responsibility.  Today, yield your heart before him.  Determine and purpose that you will listen to His Son Jesus give instruction and direction to your life.  Present yourself as His subject, a willing servant, seeking only His glory and honor… something King Belshazzar never even considered.

Discover the grace of God’s loving salvation today.  Allow the finger of God, like a quill, to write His own name on your heart and mind.