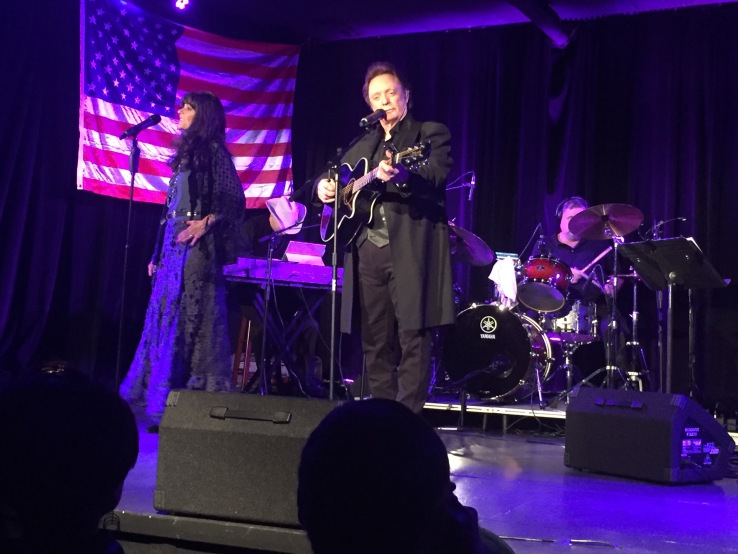 Respect: the deep admiration for someone or something because of their abilities, qualities, or achievements.

Honor: esteem, defer to, look up to, respect.

Recently, I attended a small theater, where a man and his wife, both musicians, gave a sterling tribute to Johnny Cash and June Carter.  The man said up front that it was not their intention to do an “imitation,” but rather to pay homage to an entertainer who made a huge impact during his days as a performer.  While the couple dressed in compliance with the famous duo, and did in fact look quite a bit like Johnny Cash and June Carter, it was his voice in particular that I thought captured the night’s performance.  Whether I was watching him play that guitar and sing, or if I closed my eyes and only used the memories from my youth, I heard the voice so easily recognizable as he sang, “I keep my eyes wide open all the time…” (I Walk The Line, 1957).

Thunderous applause rang like waves through the building, filled with folks who grew up on country music, and loved the Johnny Cash songs.  The tribute was a huge success, and I thoroughly enjoyed being there.

This morning I’m going to worship at our church, then teach a bible study class.  I expect no applause, I’m not a performer on a stage.  Too many people already saw me that way when I served as pastor for all those years.  It’s what we do I guess, we put leaders up on a pedestal and we see them differently than just people “like us.”

Today’s lesson is from Philippians chapter 2, where Paul gives the motivation for being in unity as a church, the means to measure how well we’re doing the job, and the perfect model for what that should look like.  In this process, Paul also does a great job of paying homage to the One who is truly deserving of our respect, honor, reverence and worship.

Philippians 2:8-11
Being found in appearance as a man, He humbled Himself by becoming obedient to the point of death, even death on a cross.  For this reason also, God highly exalted Him, and bestowed on Him the name which is above every name, so that at the name of Jesus EVERY KNEE WILL BOW, of those who are in heaven and on earth and under the earth, and that every tongue will confess that Jesus Christ is Lord, to the glory of God the Father.

Should we minister, serve, and give with the motivation to be exalted, praised, and honored by our peers?  If that is all we have, in the words of Jesus, “they have their reward.”  We do it, because in our guts we know, it’s all we can do.  We do it consistently and persistently, because the Spirit of God enables and equips us to minster, serve, or give.  And we do it humbly, knowing it is a great privilege, not earned or deserved.  Our purpose for existence is to glorify the name of Jesus.  When we take that respect, honor, or reverence for ourselves, we have literally robbed God of the homage He alone is due.