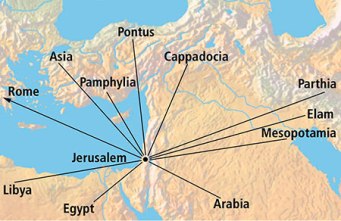 They were all together in one place… the wind rushed in and filled the house.  Each person was astounded as a flying flame flickered around the room and touched every one of them.  This Holy Spirit then used their voices in a cacophony of praise to declare “the MIGHTY DEEDS OF GOD.” [Acts 2:11]  The map here indicates the Jewish men (and proselytes) who stood in the streets of Jerusalem and heard these mighty deeds being proclaimed “in our own tongues.” [Acts 2:11]  The deafening noise, fueled by the power of the Holy Spirit, rolled over and over down each major thoroughfare and alleyway in the city, causing these men to stop what they were doing, and seek out the source of the noise.  Although, to each one, it was not noise at all, but the beautiful sound of the truth of God’s power compelling them to come and see.

And what did they find?

Peter and the other apostles standing on a patio above the street. As thousands pressed in from every corner, standing foot-to-foot, and toe-to-toe, with barely room enough to breathe, Peter “raised his voice and declared to them…” [Acts 2:14-36]

And what did they hear?

A month and a half before this moment, many of these same men were lining these exact same streets, and the roads that led into Jerusalem on their way to Passover.  Some of them were waving palm branches and calling out, “Blessed is He who comes in the Name of the LORD!”  [John 12:13]  And yet, just a short week later were yelling out, “Crucify Him!” [Mark 15:13]  Now they stand together, silent as if only one man, listening to the transformed apostle named Simon Peter.

As Peter preached this great sermon, three thousand of the tens of thousands who heard this message stepped over the line of faith, and instantly became Christ-followers.  For the rest who stood listening to Peter, they heard his words as nothing more than a cacophony of discombobulated nonsense and nothing short of heresy.

It reminds me of today’s world don’t you think?  Above the din of noise arising from every corner of the internet, social media, and fake news, there rings the voices of truth about God’s power to save through faith in Christ.  Some are able to hear it, respond to it, and know its power to change their life.  Others just hear a cacophony of noise, indistinguishable as unintelligent gibberish.

Frankly that’s how I feel about much I hear on the news channels today, where the talking heads who “suppress the truth in unrighteousness,” try to convince people all over the world to exchange “the glory of the incorruptible God for an image in the form of corruptible man…” [Romans 1:18-22]

It’s a cacophony in either direction… depending on the listener.

Out of which set of noise… will you find the truth?  Only in ONE.

His name is Jesus.