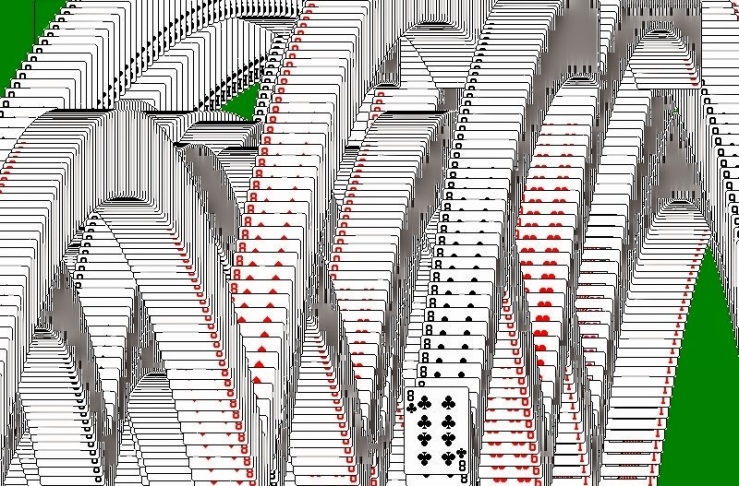 Solitary is understood to mean: by oneself, on one’s own.  Hence the genre name of any of a number of card games which are played by yourself.  The game is: you verses a deck of cards.  You sort the cards as they come, by color and/or suit, until you can’t play any more, in which case the deck of cards wins.  Some variants include: Klondike, FreeCell, and Spider.  At least these are the ones I’m familiar with.  While playing your favorite card game on your computer or mobile device certainly passes the time, did you know in 2004 Microsoft’s Chris Sells described “Solitaire” as the most-used Windows application in the world?  If you think about the millions of people around the world who were using Outlook, Word, Excel, and Internet Explorer every single day at work, or at home, that’s an alarming comment.  If you think it is questionable, think about what this truth has accomplished in influencing our culture today.  Can you go anywhere today without seeing someone’s nose stuck in a downward position, as their eyes are glued to their mobile device playing some game, texting, or reading in a solitary existence among the masses of humanity?

For years I served as Pastor to churches where I was the only staff person.  I worked in an office where no one else was around, either at the church, or in my home.  It was by every standard and definition a solitary existence.  My interpersonal communications only took place as I made the intentional effort to get out of my office chair, go out to my car, and drive to where the people were.  Most of the time I might go hours at a time without the phone ringing to break the silence.  I think I have a pretty good idea of what some prisoners experience in solitary confinement.  The feelings of isolation, loneliness, and being cut off from the rest of the world are overwhelming at times.

I would often wonder if this is how the human Jesus of Nazareth felt too.  From Scripture we have the image of Jesus being a loner, often going off for hours at a time to pray.  But that is only one side of the picture.  In fact, Jesus grew up in a Jewish community where the whole village would see Him as “their” kid.  The sense of connectedness that He must have had, not just to this little village, but to the whole construct of “the people of God” eludes us.  Not only that, but our view of Jesus being a loner is incorrect.  He surrounded Himself with 12 men who were constantly at His side.  He was a socially adept individual inevitably inviting Himself over to people’s homes for lunch and dinner.  He was a sensitive human being to those around Him who were hurting, physically, mentally or emotionally, and His ministry was very personal.  Yet, Jesus was isolated, lonely, and cut off in another sense.  He wasn’t at home, in heaven, with the Father and the Spirit.

Paul says it this way…

Philippians 2:5-7
Have this attitude in yourselves which was also in Christ Jesus, who, although He existed in the form of God, did not regard equality with God a thing to be grasped, but emptied Himself, taking the form of a bond-servant, and being made in the likeness of men.

He was equal with God.  But He didn’t hold on to that equality selfishly.  He emptied Himself, and became “one of us.” The amazing grandeur of this act alone eludes me still.  I cannot fathom it.  My petty memories of being alone in my office are so inconsequential when compared to what Jesus left behind to come and offer me grace.

Consider how alone Jesus must have felt on the cross.

Consider how alone Jesus must have been in the tomb.

Considering all the loneliness, all the sacrifice, all the devotion of His actions, and considering it all, remember… it was all for you.

Now consider these promises he made to those who believe these truths.

John 1:12
But as many as received Him, to them He gave the right to become children of God, even to those who believe in His name.

Hebrews 13:5
Make sure that your character is free from the love of money, being content with what you have; for He Himself has said, “I WILL NEVER DESERT YOU, NOR WILL I EVER FORSAKE YOU,”