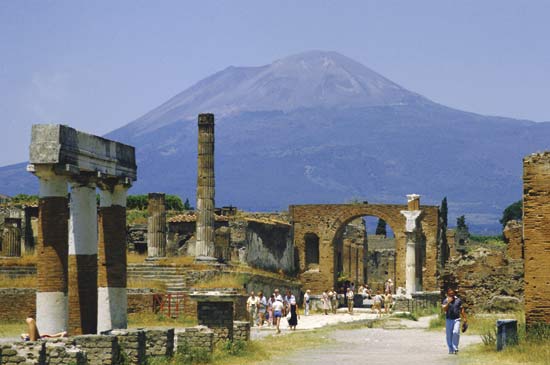 Many scholars and scientists have debated the common belief that the residents in Pompeii were killed by the falling ash and gasses emanating from the volcanic eruption of Mount Vesuvius in 79 A.D.  It is now being suggested, when the top of this mountain detonated under tremendous pressure, the people of Pompeii were instantly killed by a pyroclastic cloud surging down the mountain carrying the volcano’s lethal temperatures.

Archeologists have discovered skeletons in underground cavities formed by hardened ash.  When injected with plaster, these cavities are used as molds to recreate the bodies’ positions at the instant of death.  This process seemed to prove the early ideas promoted by Pliny the Younger who described the eruption as he watched it happen from the other side of the Gulf of Naples.

Vesuvius is still classified as an active volcano, and authorities within the Italian Civil Protection suggest that based on the population within just 10 kilometers (6.2 miles is the city of Naples) should the mountain detonate again in the manner of 79 A.D. at least 3 million people would be at risk.  What a horrifying thought.  These facts give us pause, and yet, seemingly it is not a stimulus for people to move away from the mountain and out of harms way.  Those refusing to leave the danger zone today while the volcano remains dormant, are neither stubborn, rebellious, or lunatics.  They are just people who weigh their choices and have decided they don’t want to leave their homes, their heritage, or their loved ones, just to avoid something that might not happen again in the next 2,000 years.

You may live on a street where nothing much ever happens.  You may have a life where the detonation of disease, destruction or death has not touched you personally, but you would be unique if this is so.  It doesn’t take a volcano to destroy lives.  In fact dissolving relationships, cancer, car accidents, guns or random IED’s used by terrorist today can change people’s lives in a heart beat.  We can’t move away from most of what “could” happen to any of us, at any time.  We can’t relocate to some remote island, which by the way, might just be a dormant volcano.  So what’s a person to do, when life detonates around you?

The song from my childhood comes to mind:

When we walk with the Lord in the light of His Word,
What a glory He sheds on our way!
While we do His good will, He abides with us still,
And with all who will trust and obey.

[refrain]
Trust and obey, for there’s no other way
To be happy in Jesus, but to trust and obey.

Not a shadow can rise, not a cloud in the skies
But His smile quickly drives it away;
Not a doubt or a fear, not a sigh or a tear,
Can abide while we trust and obey.

And what happens if the detonation – the Big Bang Blast – brings death and destruction, what then?

Then in fellowship sweet, we will sit at His feet
Or we’ll walk by His side in the way;
What He says we will do, where He sends we will go:
Never fear, only trust and obey.

[refrain]
Trust and obey, for there’s no other way
To be happy in Jesus, but to trust and obey.