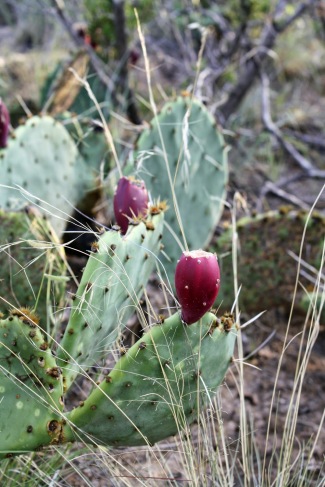 Some people may not know this, but the official state plant of Texas is the Prickly Pear Cactus, designated as such in 1995. Prickly Pear Cactus are found everywhere in the American southwest and were a source of food for the native Americans for thousands of years.  This Cacti is still a staple food for some residents in Mexico and Latin America, where the plant is raised commercially.  The name “cactus” derives from the Greek word “kaktos” which means prickly plant.

I grew up in what I affectionately called the “desert” of West Texas, where the prickly pear cactus grew naturally and abundantly in an environment not suited for other plants.  Wandering about in that wilderness in the early years of my life, I gained a healthy respect for the natural  defenses of the prickly pear, with both huge thorns, and the small prickly stingers that would get you quick if you weren’t careful.  I’ve lived in Texas all my life, and yet haven’t ever had a single taste of prickly pear fruit.  I always thought anything protected that well, wasn’t meant to be eaten.

In Psalm 107:43, the psalmist asks:
“Who is wise? Let him give heed to these things, and consider the lovingkindnesses of the LORD.”

These prickly pear cactus and desert images cause me to reflect about how God leads those who wander through barren and dry places in life.  I think about times when I was very thirsty and hungry relationally, wondering if God was hearing me cry out to Him in pain, or sorrow, or frustration.  I remember the times of physical pain after back surgery, and what seemed like long tortuous months of rehab, when depression sank deep into my soul, becoming a constant companion of the pain.  There were days I was so disoriented from these influences, I’m pretty sure almost nothing I cried out to God made much sense.  Psalm 107 became a source of healing for me, when my doctor got me off the medicines that were causing these side effects, and were altering my reality.

Psalm 107:1-9
Oh give thanks to the LORD, for He is good, for His lovingkindness is everlasting.
Let the redeemed of the LORD say so, whom He has redeemed from the hand of the adversary, and gathered from the lands, from the east and from the west, from the north and from the south.
They wandered in the wilderness in a desert region; they did not find a way to an inhabited city.
They were hungry and thirsty; their soul fainted within them.
Then they cried out to the LORD in their trouble; He delivered them out of their distresses.
He led them also by a straight way, to go to an inhabited city.
Let them give thanks to the LORD for His lovingkindness, and for His wonders to the sons of men!
For He has satisfied the thirsty soul, and the hungry soul He has filled with what is good.

Psalm 107 applies directly to me and how God has used the desert times of my life to teach me about His grace, His lovingkindness, His mercy, and His abiding presence.  He was there to make sure I’m wasn’t destroyed, by outside forces or forces in my head and heart that are foreign to Him.  That we sometimes must go through the desert experience to bring about a holy purification, to learn from God a deep truth, or to broaden our perspective regarding God’s sovereign authority over our lives, is a fact discovered only by living through those painful desert events.  Yes, they are painful, and seemingly endless.  Yet, His abiding presence sustains us through each step.

Psalm 107 promises us that God does indeed respond to our brokenness, to our tears of shame or sorrow, to physical pain or emotional pain, of our own doing or someone else’s, and can still lead us out of this wilderness.  In fact, His desire is to bring us into a well-watered land, a land of life and hope, freedom and healing.  We wish at times He would bring us there faster.  We pray that the pain would be over quicker.  While in the middle of the desert, we have to believe without seeing – what God is doing.

Psalm 107:35-36
He changes a wilderness into a pool of water and a dry land into springs of water; and there He makes the hungry to dwell, so that they may establish an inhabited city.

It’s not me finding my way out.  It’s not me making the most of prickly pear plants in spite of their thorny protective coverings.  It’s me believing that God will deliver me out of my distress.  It comes in His timing.  Fine.  Deliverance comes in unexpected ways.  Fine.  The process takes longer than I want, involves changes I don’t yet see, and requires faith.  Fine.  But it does come.

So read verse 43 again, and this time don’t look at the prickly pear cactus, or the desert environment that is causing you such pain.  This time see the big picture, and the sovereign control, authority, and abiding presence of the LORD.

Psalm 107:43, the psalmist asks:
“Who is wise? Let him give heed to these things, and consider the lovingkindnesses of the LORD.”