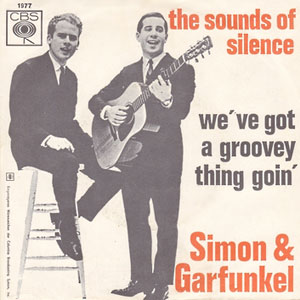 Simon & Garfunkel’s song was pounding in my headache as I awakened today. “Hello darkness, my old friend… I’ve come to talk with you again…”  Recorded in 1964 by Columbia Studios in New York City, I was only 10 years old when I heard this song on my sister’s radio.  Half a century later, clear as crystal these lyrics sang back to me from my subconscious sleep, over and over and over.  Now I need a nap, to get some rest.

Actually, I’ve had a great deal of experience with silence.  For years as a pastor, whole periods of my daily existence were completely void of sound.  While I would read, study, and write sermons and Bible studies, even the clock made no noice, it was digital. Occasionally I would hear a squirrel run across the roof, or the sound of thunder during a rainstorm, the wind howling through the leaky windows.  Mainly though, the silence was deafening.

It wasn’t that I couldn’t have called someone on the phone.  Yet there it sat, inches away, making no sound.  I could have listened to music, turned on a playlist, the radio, something.  The sound of silence had truly become comfortable for me.  During those hours of quiet contemplation and communion with God, He instilled in my mind during these times of silence, thoughts I would write then later speak.  Even now, as I write these words, the click-click-clicking of the keyboard is as loud as the framer’s hammer driving 3 inch nails into the house being built down the street.  It’s silent in my office, and I hear the cars rushing by on the street as their drivers stream toward work and school while I sit silently listening.

Last line of “The sound of silence” goes like this:

The cryptic language of the song is a fascinating study in the power of lyrics and music. A neon light, thousands of people talking without speaking, hearing without listening, writing songs that no one hears, because they are never shared… these are very powerful images, but what does it all mean?  Simon said in an interview with NPR, “It wasn’t something that I was experiencing at some deep, profound level – nobody’s listening to me, nobody’s listening to anyone – it was a post-adolescent angst, but it had some level of truth to it and it resonated with millions of people. Largely because it had a simple and singable melody.”  So there you go, just a song that resonated with millions of people, because of the music and lyrics.

David the King of Israel wrote music and lyrics thousands of years ago, which people still sing.  We don’t really know what the music sounded like, so much as we know the lyrics today.  Although Amy Grant helped us all with “Thy Word is a lamp unto my feet and a light unto my path,” [Psalm 119:105] and other music artists along the way have captured the Psalms in their music,  I wonder if there was music accompaniment at all to some of the things David wrote.  For example, “Shout joyfully to the LORD, all the earth; Break forth and sing for joy and sing praises.” [NASB] many people my age recognize as “Make a joyful noise unto the LORD, all the earth: make a loud noise, and rejoice, and sing praise.” [KJV] Psalm 98:4

During my hours of study there would be times of joy and shouting, and times of weeping and silence.  In all those hours I remember fondly God’s voice “whispering in the sounds of silence.”