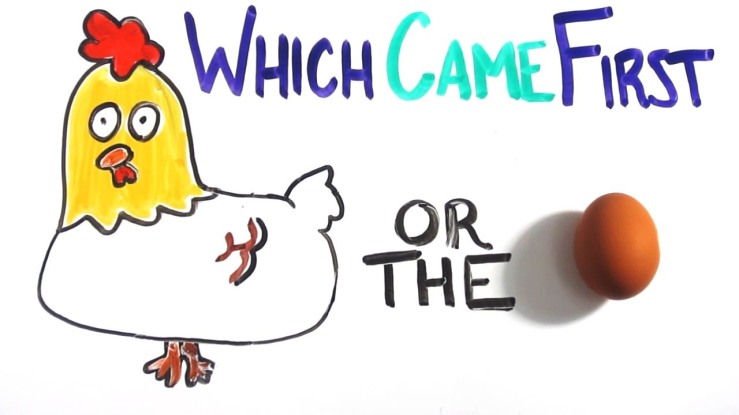 Which came first the chicken or the egg?  It’s really a question about causality.  And this particular question can make your head spin.  Riddle’s are like that.  Luna Lovegood (the dotty witch from Harry Potter) when asked a riddle replied, “A circle has no beginning.”  The famous chicken/egg debate is circular riddle from any perspective.  In an article from MNN (Mother Nature Network), written in early 2013, Melissa Breyer answers the question by pointing to a video that for most atheist and agnostics works well.  It’s interesting, informative, scientific, visually engaging, and totally ignores the root of the problem.  Breyer alludes to the problem in her article.  The causality dilemma is really only a riddle, or problem, for those who don’t already know the answer.  The Genesis creation story solves the riddle with clarity, giving us the root or causation answer.  This answer is unsatisfactory for anyone who does not know God.  God created animals, not eggs.

It’s the same question really as, “What came first, the Patriarchs or the Nation?”  Even in our wonderful USA culture we have originators who held the roots of an idea for freedom of religious expression.  We were not a nation at the time, yet became a nation when men chose to follow the Creator, rather than men,  The king didn’t like it, but there you go.  It was the egg (idea of religious freedom) that produced the chicken (the Republic), not the other way around.

Israel was not a Nation before God said to Abram, way back in Ur…
Genesis 12:1-3
Now the LORD said to Abram, “Go forth from your country, And from your relatives And from your father’s house, To the land which I will show you;  And I will make you a great nation, And I will bless you, And make your name great; And so you shall be a blessing; And I will bless those who bless you, And the one who curses you I will curse. And in you all the families of the earth will be blessed.”
The root of this nation is Abram, when God changed his name to Abraham.

So we have to go back even further into Eternity Past and ask the question, “Who came first, God or Satan?”  Have God and Satan always just coexisted?  Are they equals, like two sides of the force in Star Wars?  Science fiction leaps in at this point and cries “yes!”  Only those who know the truth can answer this riddle, and the answer is no.  Satan, was Lucifer, one of God’s archangels who rebelled against God’s LORDSHIP.   He is pure evil, he is out to destroy God’s creation and rob God’s glory.

The ULTIMATE riddle is one that comes out of this understanding of causation.  The question is, “Why did God create a CREATURE (satan) who would ultimately attempt to rob God of this glory, and allow satan to corrupt mankind, allow satan to attempt to destroy the planet, or even exist in the first place?”  You see, that is a good question.  The reason it is so good is that while I have a theory about the answer, it is unprovable until the Creator answers it in person.

I’m going to ask Him one day, just so I can know if I’m right or not.