Nike is a giant-slaying footwear manufacturer, who’s slogan is famous and known around the world. 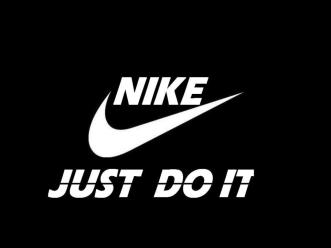 Do you know what the word “Nike” really means?  The word is Greek, and the verb form is νικάω = nikaó (nik-ah’-o).  According to Strongs Concordance the short definition is “I Conquer.”  The use of this verb implies a battle.

I was going to write about famous conquerors, quote them, then make some typical practical application of how these actions apply in our life today.  What happened along the way of my creative process was a complete 180 in my thinking.  I was suddenly taken back to my days as a boy in Sunday School, in a little country church near our home.  I remember sitting there while the teacher talked about the shepherd boy, David.  This young boy fought and killed a giant, conquering the Philistine army in that one-on-one battle. I remember thinking, “how could he do that?”  The question for me that day, and almost every time I’ve heard the story, or taught the story since has been, “wasn’t David afraid?”  I still believe the answer is “yes.”

I’m going to take a lot of grief for saying that here, just as I have at other times when I put humanity back in it’s place contextually.  Think of it like this, as Nelson Mandela is famous for saying it, “I learned that courage was not the absence of fear, but the triumph over it.  The brave man is not he who does not feel afraid, but he who conquers that fear.”  Once we can grasp the idea that fear doesn’t have to mean defenseless or powerless, we can begin to understand how a young shepherd can conquer a giant.  The point of this story being in the Bible records of Hebrew history in the Old Testament is not as much about whether David was courageous or cowardly, as it is about David’s complete dependance on God’s providential care in every circumstance of life.  It’s more about David’s conquering faith, while squaring off with a man so skilled in the acts of war he was considered a one-man army.  It’s about knowing through previous personal experiences that regardless of what life brought into David’s path, he could and he would act courageously while fearfully trusting in Yahweh to provide what David needed in the heat of the battle.  Courageous David would run through his own fear into the valley of death where the giant stood bellowing insults at Israel.  Listen to David’s own words:

1 Samuel 17:26
Just who is this uncircumcised Philistine that he should defy the armies of the living God?”

When Jesus was about to die, He met with His disciples on Passover and gave them instructions about how to go forward without Him.  John, the one whom Jesus loved, wrote the most complete narrative of all the dialogue between Jesus and the twelve that night at the supper.  John chapter 16 gives a warning, a promise, a prophecy, and a command.  Jesus warns them about persecution coming to them for following Him as their Master.  Jesus promises them they will have help to face whatever comes, because He will send the Holy Spirit to empower them for their mission.  Jesus prophecies of the actions of His impending death and resurrection.  And in the end, Jesus commands them [John 16:33]…

I have told you these things so that in Me you may have peace. You will have suffering in this world. Be courageous! I have conquered the world.

Jesus to me (a disciple): “Peace of mind is knowing I’m still in charge, even when you don’t see me.  Peace of mind is believing that I’m still working behind the scenes to make My Father’s will completely perfect in your lives.  You’re going to suffer, and this causes you to be afraid.  Don’t be. I’ll send help in the exact moment you need it most.  So take courage through your fear, and throttle the thing that will attempt to take your life.  I am about to give you a model for how to do exactly that!”

Paul’s letter to the Romans was designed to bring this same kind of confident life action and motivation.  Chapter 8 is a description of all the things in life that may come at us, that tries to separate us from God’s loving grace.  Paul wraps us His long explanation of deliverance from bondage to the world, and our victory in Jesus, with these words:

Romans 8:37-39
But in all these things we overwhelmingly conquer through Him who loved us.  For I am convinced that neither death, nor life, nor angels, nor principalities, nor things present, nor things to come, nor powers, nor height, nor depth, nor any other created thing, will be able to separate us from the love of God, which is in Christ Jesus our Lord.